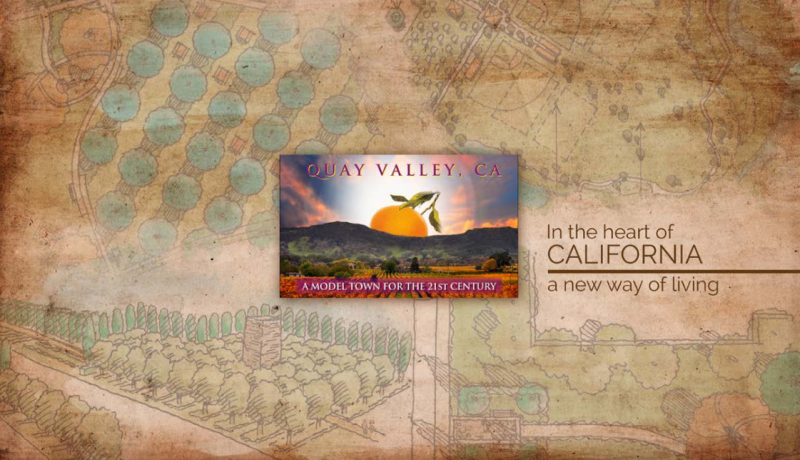 What do cities look like in the world of Hyperloop transit? Will supersonic travel turn our cities into vast, intermodal suburbs? And what about the edge towns that once bled into the country, fed by car travel—will they empty out and decay, eliminated by a new form of transportation that bypasses them?

Oddly enough, the first test of Elon Musk’s open source design may be built in a planned village that looks more like a vision of 1950s suburbia. It’s called Quay Valley, and it’s a “21st century model town” planned on a 7,500-acre piece of empty land between LA and San Francisco. It’s the place where Hyperloop Transportation Technologies—the group of engineers who set out to build a Hyperloop last year—has chosen to build a $100 million mockup of the project, eventually to run between the two cities.

“The air is cleaner, the water is purer, the people are healthier, life is more abundant and residents are enriched by the culture,” says Quay Valley’s sale material [PDF]. There will be tree-lined streets, organic farms, even a village green. There will be three themed resort hotels (the project is advised by two former Disney execs) and several million square feet of boutique retail and commercial space. It will sit directly alongside Interstate 5, the freeway that runs between San Francisco and LA, and be populated by long-distance commuters from each city. It will be a solar town where no homeowner ever pays an electricity bill. ….

July 22, 2016
0
Triptyque Architecture took part in a 150.000m2 master plan in the city of São Paulo organized around a university campus receiving 15.000 students