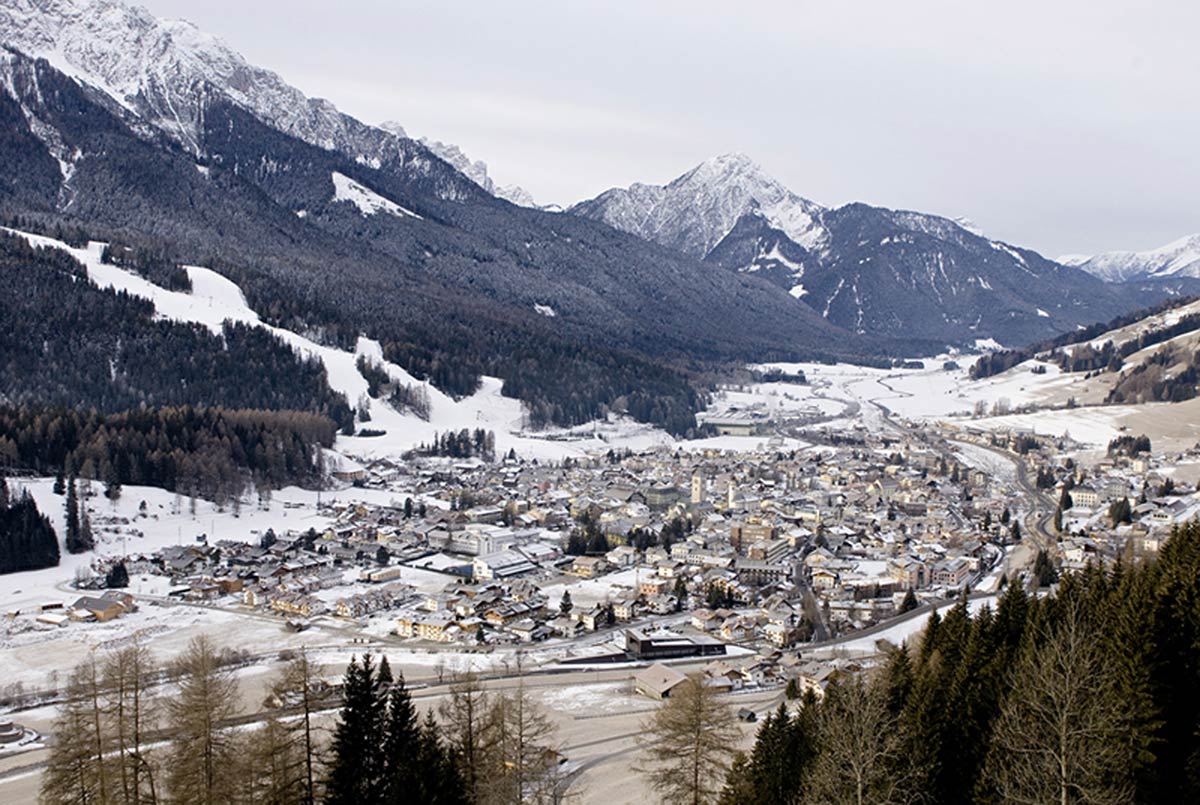 The project of a civil protection centre on the outskirts of the community of Innichen in the South Tyrolean Hochpustertal planned to house the action force of the local voluntary fire brigade, the White Cross and the Alpine Rescue Service under a common structure.

Additionally, the large parking site outside the centre is restructured and extended. 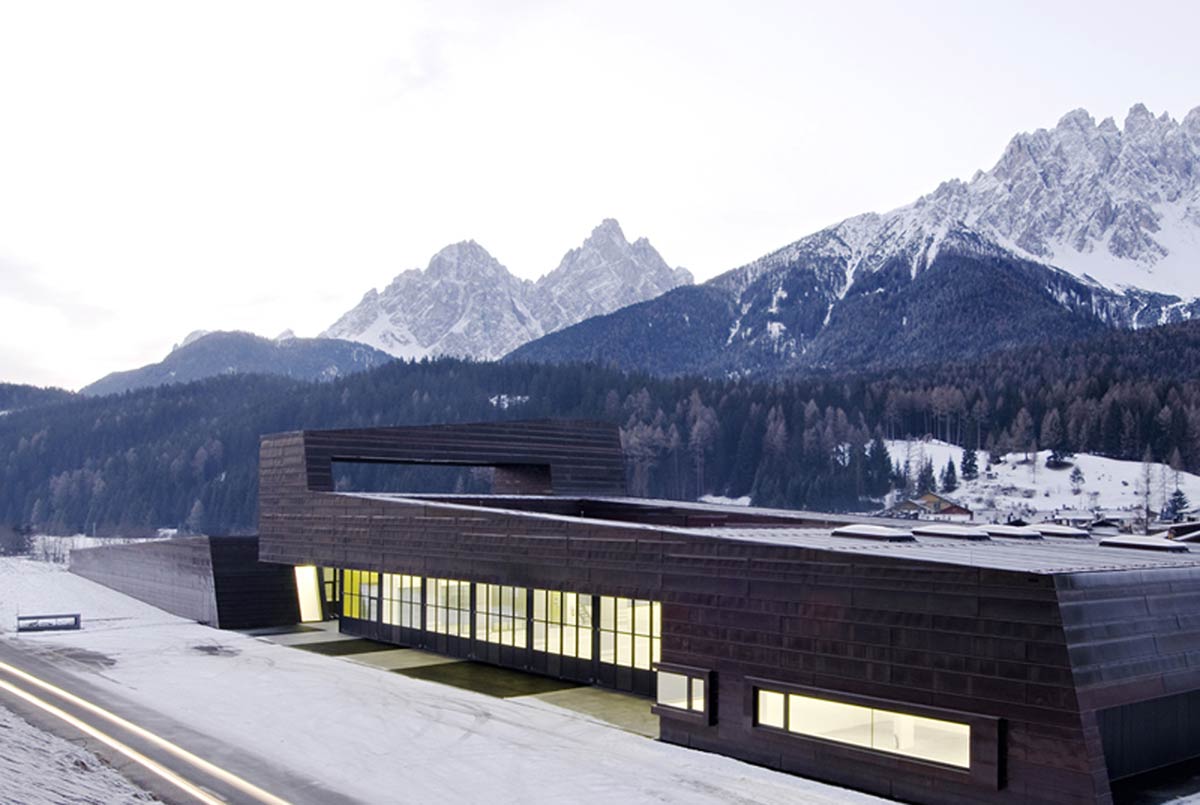 The northern side of the already existing car park is confined by a steep embankment where some four meters higher upruns the in-town street which meets the main road. From there the majority of the rescue forces will be mobilised. This project reacts to the position of the eastern village entrance as well as to the single family housing in the direct surroundings and shall serve as an outpost of the rural zoning structure which ends at the village boundaries in the typical urban sprawl. In comparison to the close-by houses, the building mass for the construction of the civil protection centre will be ten times higher. In order to ease this contrast, the building was moved into the slope on its northern side while the inferior part is at the same level as the existing car park and the superior part as the in-town street. 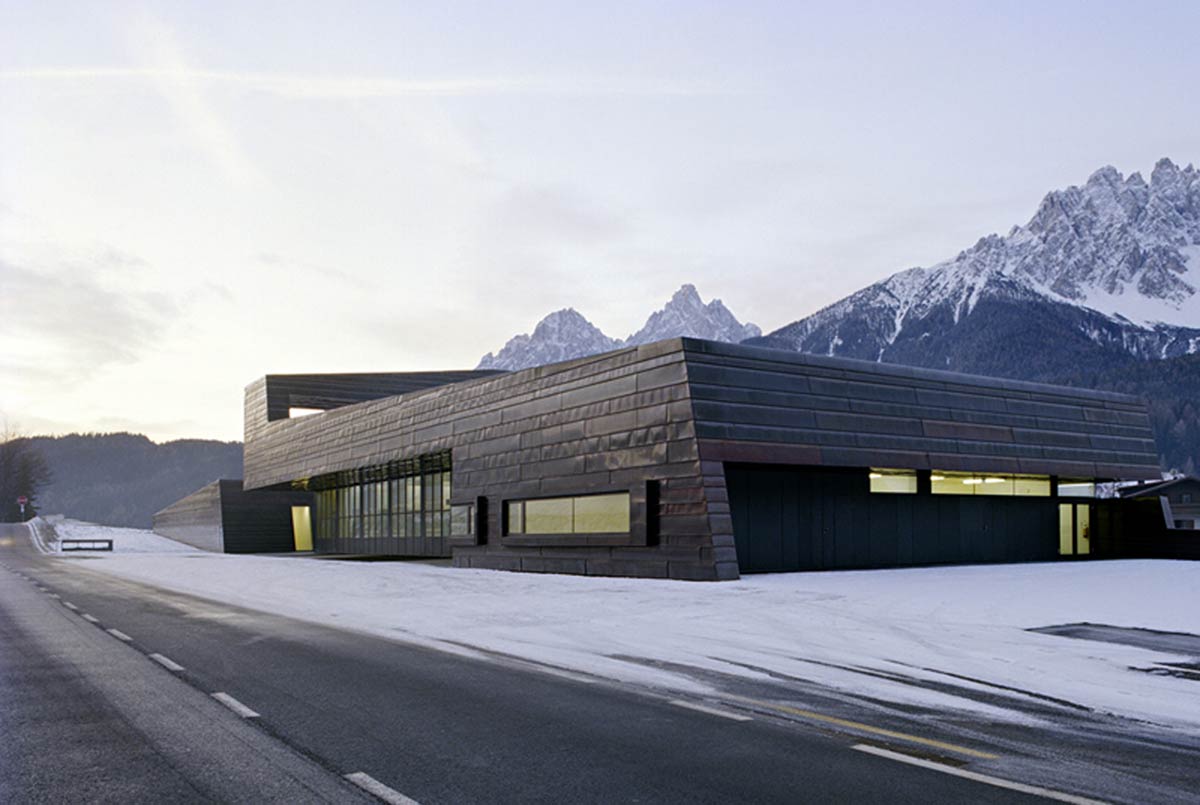 Viewed from the South, the building appears with two storeys according to the land course and the steep embankment in the background. Looking from North, the centre is one-storied, divided in two parts and consequently harmonising with the single family housing in the background. From the main direction of sight along the street, the building appears hardly bigger than the surrounding housing – one-storied and a width of 20m. From the eastern perspective, one of the structure parts disappears along the street slope. The volume is structured according to the prevailing background. Due to topography and to the altitude of the street, the typical organisation of this kind of buildings is turned on its head: the vehicle halls are at street level in the upper part and staff-rooms, lounge and training classrooms are mainly accommodated on the ground floor as is the parking site. 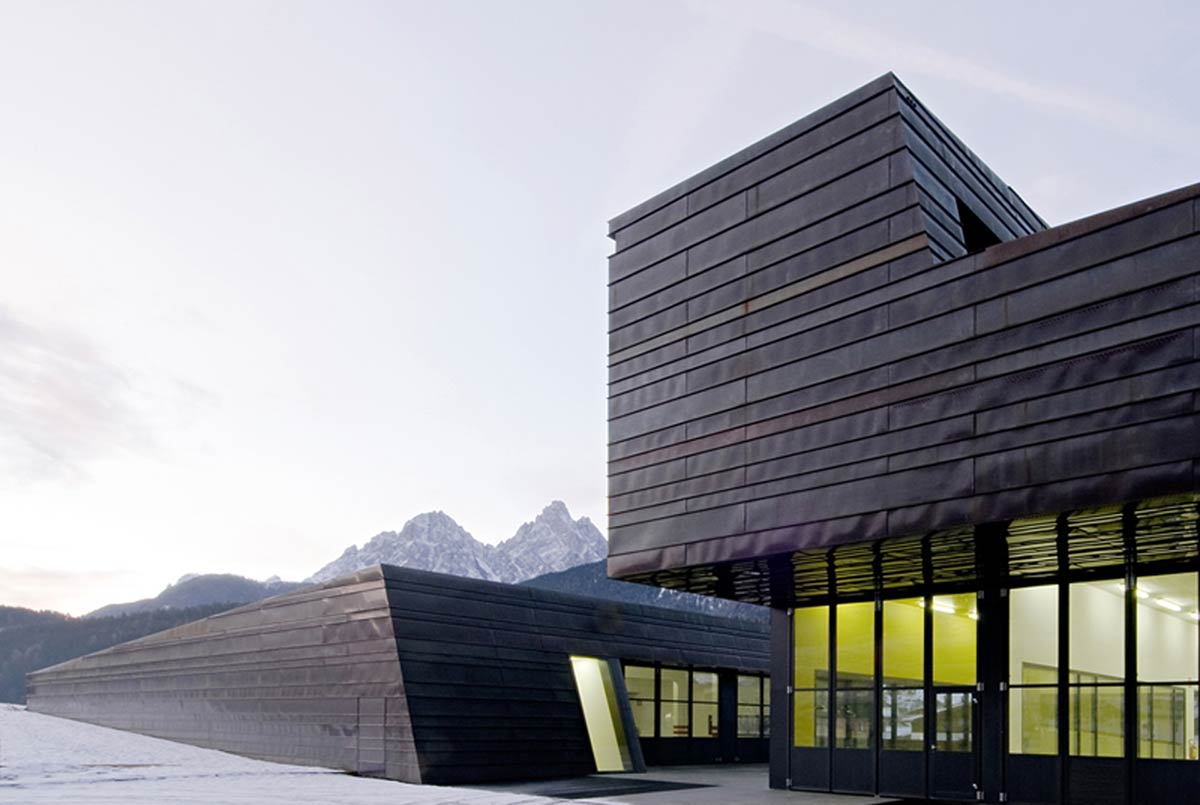 The extension of the building along the street and contour line allows an optimal organisation of the rescue work and the most rapid and direct gateway for all rescue vehicles. On the one hand the centre’s hillside position and the depth of the building make the illumination and aeration of the ground-floored staff-rooms difficult. On the other hand new potential for interesting and spectacular spatial arrangements emerges. The stairways are illuminated by borrowed light and paned windows. The main corridor leads to the outside on both ends of the building and gets daylight via the overhead windows in the stairway and a supplementary airspace. The results are a spectacular room height as well as interesting views. The southern and eastern facades of the building’s inferior level offer south-orientation over wide lengths and the nose of the upper level provides shadow during the day. 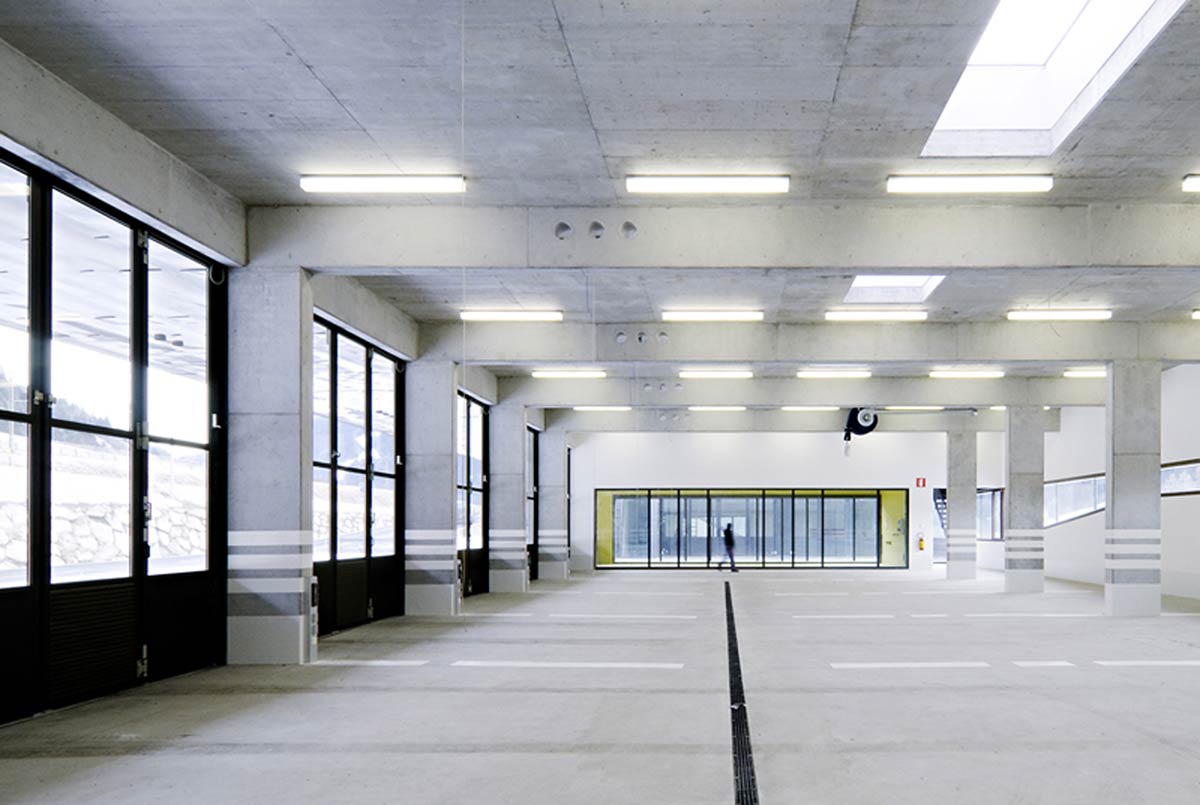 A cutout of the volume forms a covered exterior space for the car park and the courtyard situated below the fire brigade hall creates illumination and ventilation for the close-by slope-sided adjoining rooms. Slope-sided constructed inner courtyards with the height of one storey prolong the exterior space and expose respectively slope-sided subterranean useful areas. The roof area becomes the fifth facade in the mountainous Hochpustertal. 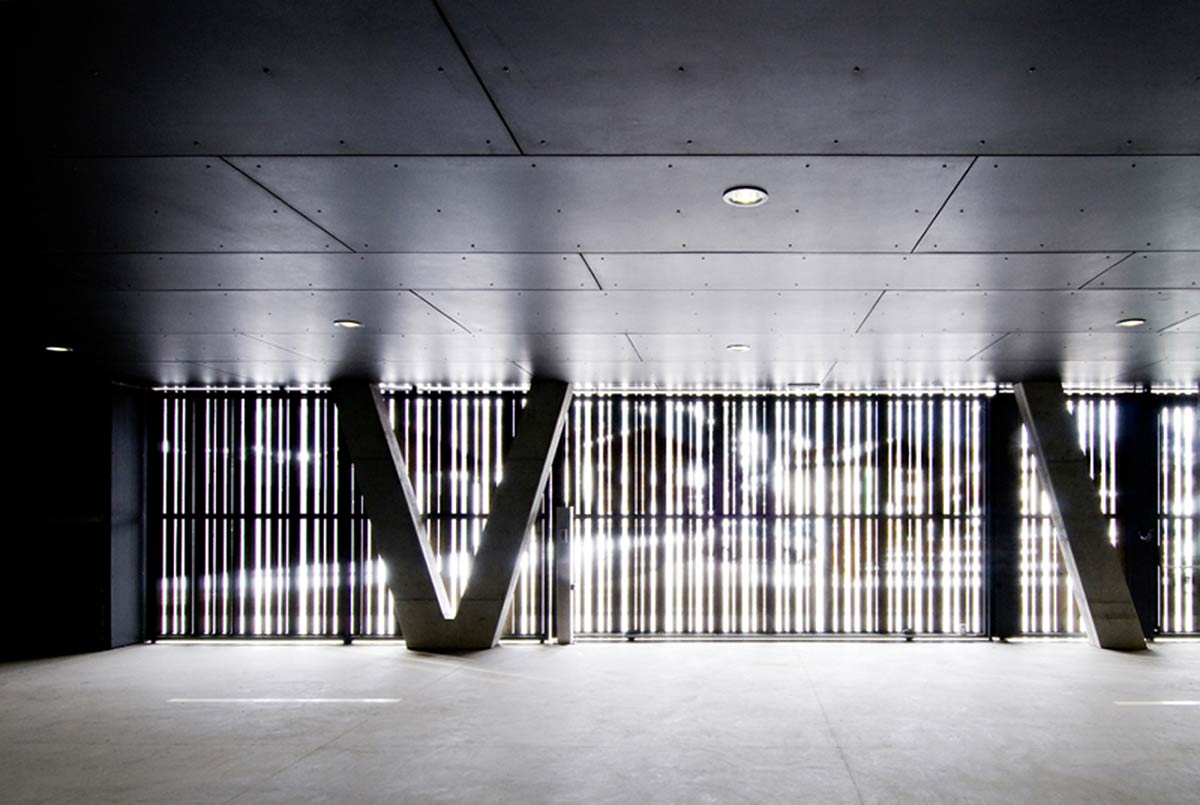 The structure will be covered with oxidised sheet copper – the adequate material for facades as well as for roofing. Reddish brown earthy clay and laying in shingle-technique confer a lively and haptic quality to the building. Simultaneously with the construction of the civil protection centre, the car PARK which is a park and very suitable for parking, will be redesigned. On the one hand the traffic areas are fortified (asphalt, precast concrete block paving in a sand bed) on the other hand open spaces in this dimension are not supposed to be sealed: The fortified areas are therefore riddled with surfaces which enable infiltration. Strips of gravel between the parking rows are used as infiltration facilities. Additionally, strips of Feather Reed Grass provide infiltration possibilities as well as oxygen, shadow and a natural atmosphere.

September 9, 2015
0
The inclined plot on the outskirts of Linz lies in the middle of nature, has a panoramic view and is characterized by its topography.