Home Rooms Bathroom Are Non-Electric Bidets Worth It? | Things You Should Know

Installing a non-electric bidet is one of those decisions that you’ll likely never regret. It’s easy to install, convenient to use, improves your hygiene, and cuts down on your costs significantly. It’s an excellent replacement to toilet paper, one that will likely become a permanent part of your daily life.

You have your mind set on getting a bidet converter kit and you’ve made all the necessary preparations. These kits come in two varieties, electric bidets and the simpler non-electric variants. At first glance, the former seems like the no-brainer pick, right?

The dilemma arises from the fact that non-electric bidets are nearly as effective as their electric counterparts. So, where do the two variants differ?

Let’s glance into both of these bidets and see why a non-electric bidet is worth the price of admission. 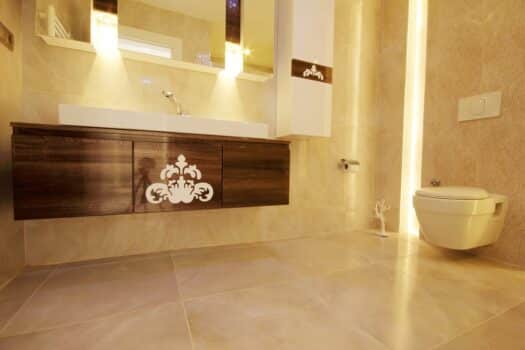 Electric bidets are, in essence, an electronic enhancement for your toilet seat. The installation requires you to remove your old toilet seat and place it in its stead, along with a connection to an electrical outlet.

In addition to the most elementary bidet function, electric bidets prioritize user comfort, offering various options to maximize the user’s convenience. Manufacturers include extra features in electronic bidets that are normally inaccessible without power and, naturally, are absent from the non-electric counterparts.

Manufacturers strive to make the most out of the electronic aspect of their product. Some brands include a heated seat as a standard feature in all models so that you don’t have to endure a chilly seat in the winters.

Most electric bidet attachments come with an operation panel, and some of the models include remote control operation as well. This enhances user experience to the limit, with the panel enabling access to features like warm water stream, oscillating nozzle, and an air hand-dryer. Some of the more niche features that you’ll find on select models are self-rinsing nozzles, built-in deodorizers, and a customizable seat topper. You can also optionally have night lights installed, if you prefer.

Electric bidets are designed to go with most standard toilets, so you don’t have to worry about it fitting under your seat without obstruction. Moreover, manufacturers ensure that the installation is simple enough to be performed by nearly anyone, regardless of their experience with electronics.

The first and most noticeable con of electric bidets is the price, which is quite a bit higher than their non-electric counterparts. Since these are electronic, you can expect your power bill to rise as well, becoming more noticeable over time.

Secondly, you’ll need an electrical outlet close to your toilet seat to supply electricity to the bidet. If your bathroom layout doesn’t have an electric outlet in the seat’s vicinity, you will need another outlet installed, which will further add to the costs.

Non-electric bidets are generally simple and have fewer moving parts than electric bidets. This also means that they have fewer features than their electronic counterparts, although that may be a positive for some people. It sounds counter-intuitive, but there is a good explanation for it.

You’ll find that some non-electric bidets are small showerheads attached to the water supply, while others attach to the base of your toilet seat with a manually adjustable nozzle. Higher-end non-electric bidets have more moving parts and more features through mechanical operation.

Non-electric bidets are more affordable and can be installed on nearly all kinds of toilets. Fewer moving parts means that they can fit on almost any toilet seat, require little to no maintenance and have no need for an electrical outlet.

The installation process is even simpler than electric bidets and even when dealing with a higher-end bidet, you’ll have only a little trouble fitting it. Since they don’t replace your existing toilet seat, you won’t have to spend time removing your old one. It saves time, money, and space all at once.

Non-electric bidet models cannot heat up the water they spray, so you’ll have to endure the cold water during winters. Moreover, due to fewer components and the complete lack of electrical dependence, the bidet can’t offer many of the pros that make electric bidets desirable.

Manual operation also means that people with mobility issues may have trouble using a non-electric bidet. Moreover, there is no heated seat or air dryer feature and it has none of the electrically-operated features of the electric variant.

If you’ve found this guide helpful so far, consider checking out our article on how to repair digital vernier caliper as well!

How Non-Electric Bidets Overcome Their Flaws 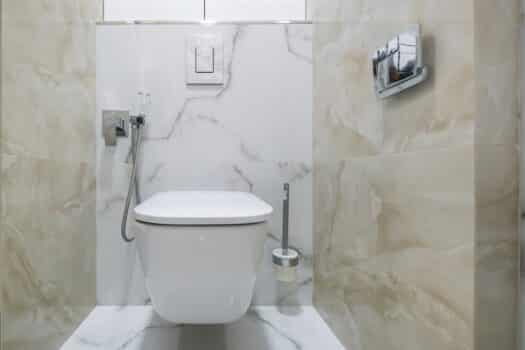 A non-electric bidet has a few cons that can be circumvented quite easily, something that cannot be said with much conviction about the electric variants. Say, if the power goes out, your electric bidet will see no use unless you have an emergency power supply installed at home.

Let’s explore how non-electric bidet attachments can overcome some of their flaws.

A non-electric bidet cannot heat up the water they spray, but this can be overcome with one simple adjustment: connect it to the hot water line from a nearby sink. If you live in colder areas, you are likely to have done this already.

People with mobility issues may find it difficult to operate handheld or manually adjustable bidets. However, there are several non-electric bidet models that address this issue and allow these adjustments by way of a small panel next to the toilet. The panel contains several knobs that allow control over temperature and functions of the bidet like spray pressure and nozzle direction.

These features that make manual bidets accessible to differently abled people are also higher end, resulting in the costs rivaling those of an electric bidet.

The US alone use approximately 36.5 billion rolls of toilet paper, costing the country many billions of dollars in addition to the impact of deforestation. Moreover, water used to flush down a single roll of toilet paper is about 37 gallons.

While bidets are more environment-friendly than toilet paper by definition, non-electric ones are even more so. They use no paper and the amount of water they use is extremely tiny by contrast.

Non-electric bidets, by forgoing the use of electricity, save even more water and contribute to the overall health of the planet. It sounds small, but if the masses adopt non-electric bidets over toilet paper, the impact on the environment will be a positive one.

The use of either an electric or a non-electric bidet improves your hygiene significantly. Through the act of washing, the bacteria content of one’s excrement is decreased significantly and the hands-free nature of bidets limits their spread.

Even the small risk of a poorly-aimed stream is easily fixed in both electric and non-electric bidets. If you’re using a handheld non-electric variant, the chances are reduced to none, as the bidet gives you complete control over its cleaning capacity.

A bidet can become a covert part of your bathroom, tucked away in plain sight. If your bathroom has limited floorspace, you’ll want a bidet that saves as much space as possible. This is usually more feasible with a non-electric bidet that fits directly onto the seat. Simpler models have no additional panels to fiddle around with, making them an excellent option for saving space.

What are the different kinds of non-electric bidets on the market?

Standalone bidets have the appearance of a sink on the floor with a water-spraying tap. Some models allow the bidet to fill the sink completely, while others are equipped with high-pressure water jets. These bidets are typically placed next to the toilet seat and occupy the most space of the three kinds.

Handheld bidets are some of the simplest designs you can find on the market. They look like miniaturized shower heads attached to the toilet. Operating them is simple: use the lever after positioning the shower head appropriately. These bidets give you complete control over the positioning of the stream, more so than most models.

Lastly, built-in bidets are the kind that attach to the base of your toilet seat. These may be accompanied by a mechanically-operated panel, allowing you to operate the various features of the bidet. These bidets may come with multiple nozzles for maximum cleaning efficiency.

How impactful is a non-electric bidet on my water bill?

The amount of water used by a non-electric bidet is extremely minimal, even when used liberally. This is especially highlighted if you contrast the water consumption against a roll of toilet paper. A roll of toilet paper can use up to 37 gallons of water, while a bidet uses only approximately a tenth of a gallon.

So, the impact of a bidet will be insignificant, and if you’ve been using toilet paper this far, you’ll end up saving money instead.

Are there any drawbacks to using a bidet?

There are a few drawbacks to using bidets, albeit minor ones. Some bidet models necessitate minor renovations during installation, causing you temporary inconvenience. It may also be somewhat tricky to adjust to using them if you’re a first-time user. After all, using a bidet can be a foreign feeling for those who have never used them before.

You may see a few health concerns with regards to bidets as well. Warm electric bidets run the risk of bacterial contamination, something that is present in non-electric bides as well, only to a lower extent. People with weakened immune systems may want to steer clear of bidets in general.

Do I need to call the plumber to install my non-electric bidet?

You don’t need to call the plumber to install a bidet of any kind, unless you’ve opted for a standalone bidet. Regular bidets are designed for easy installation and the simpler, non-electric models only require a basic toolset to properly fit. It takes less than 30 minutes to properly install and test your new bidet, no matter how skilled you are. 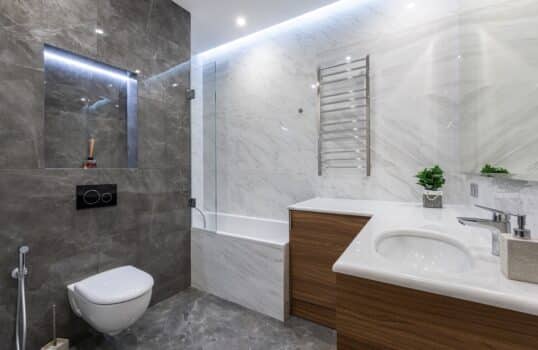 Once you install a non-electric bidet in your toilet, you may find it difficult to go back to regular toilet paper. Non-electric bidets do have flaws, but none significant enough to outweigh the pros they bring to the table. Unlike its electrically-operated counterpart, a non-electric bidet is easier on the pockets and lasts quite a long time without requiring any maintenance on your part.

No matter the kind of a bidet you choose, it’s a hygienic and environment-friendly alternative. The impact of bidet has grown in recent years and the trend is likely to grow from here onwards.

If you don’t mind the absence of some of the features in favor of longevity and lower chances of malfunction, a non-electric bidet is the way to go. You can start thinking about where to buy a bidet attachment if you’ve made up your mind!

Blinds Or Curtains For Your Bathroom?

October 6, 2021 0
When it comes to setting up our bathroom, we want only the best! There’s hardly any soul that doesn't find peace in this space. From...