Home DIY Projects & Ideas How Do Invisible Ink Pens Work? | All You Need To Know

Invisible ink pens use disappearing inks made using chemicals like thymolphthalein and sodium hydroxide. These inks can be of different types, from heat-activated to UV-activated inks. Once the message is written, it becomes invisible and can be decoded using UV light, heat, or chemicals.

When you think of the best inking pens, do invisible pens come to your mind? You may have wondered how they function whenever you used them to write secret messages to your best friends back in the day.

Well, invisible ink pens work in interesting ways, and you can even make invisible ink with just a few supplies easily found in your kitchen cabinet. So, before you bring out the secret agent in you, let us take a look at how these pens function.

What Is An Invisible Ink Pen? 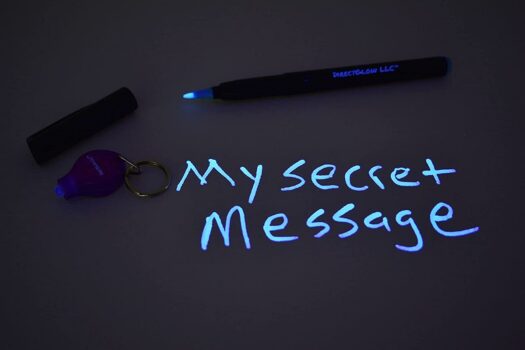 Invisible ink pens are pens that use invisible ink, also known as sympathetic or security ink, for writing and sending secret messages. Some inks disappear immediately (as soon as the pen nib touches the paper), while others can take a while to disappear completely.

Commonly referred to as UV markers, whatever you write using an invisible pen will be both transparent and fluorescent. As such, one can read the hidden message only in the presence of UV light.

These pens are extremely popular among kids today. They are available in a variety of designs and colors with a built-in UV light to decode the invisible message.

Historians mention the use of invisible ink from a long time ago, where it was used as a medium to send hidden messages across. It was one of the most common methods of communication.

In fact, Roman poets would often use invisible ink to communicate. They would use fresh milk to write the secret messages and the receiver would use powdered charcoal to read them.

There were also people in the royalty, who communicated with their supporters that they wished to keep a secret. They used alum or gall ink to write the messages. Alum would be made readable by soaking the paper in water while the gall ink would be soaked in iron sulfate solution.

Of course, invisible ink was also of big help to many lovers. It was a safe method to keep in touch with a beloved without being cast aside by their opposes.

Moreover, during wars, soldiers found this to be a great way to communicate their plans without having their enemies find out. They also had a specific type of ink that they all commonly used among them so that the receiver would always have means to reveal the secret message.

How Does Invisible Ink Work?

If you’ve been search for guides on how to use calligraphy pen with ink, you may have come across invisible ink pens. If they intrigued the secret agent in you, let’s take a look at how they work.

Invisible ink pens use inks that are usually invisible to the naked eye or can disappear (aka disappearing inks) in a few seconds. They are usually made using chemicals namely thymolphthalein and sodium hydroxide. Thymolphthalein is usually a colorless chemical but when mixed with the base solution, it turns blue.

As soon as this base reacts with carbon dioxide, which is always present in the air, the pH levels fall and the ink becomes invisible again. You will then have to shine UV light on the paper to read the hidden message. And in some instances, even heat and chemicals help in making the written text visible again.

Disappearing inks are commonly used for:

Now, that you have an idea of how invisible ink pens work, let’s go through some of the common types of invisible inks that have been around since time immemorial. This section will also help you make invisible ink at home (the DIY way) using a few simple items that can be found at home.

Heat-activated ink is made using certain organic liquids that make your writing invisible once dry. Just walk into your kitchen and you will find most ingredients needed to make this ink. These include:

Once you have written a message using one of the above-mentioned liquids, you can use any kind of heat to read the writing. It can be an iron, a flat iron, a 100W light bulb, or even the microwave oven. Once the paper heats up, the liquid that you used will turn into another color, usually brown because of the acidic properties it contains.

Chemically-activated ink often means that the ink used is a colorless chemical. It will only develop color when a base chemical is added. Both will react with each other, thereby allowing you to read the writing.

Tip: Using the water of red cabbage instead of heat can make the messages written using vinegar (which otherwise is considered to be a heat-activated invisible ink) visible.

Here are a few more examples of what can be considered as chemically-activated ink:

Let’s begin with an interesting fact – earlier if you wanted to leave the park for a moment (to the parking lot for example), you’d have to get a stamp on your hand. As such, you could re-enter the park without having to pay anything extra.

But since these stamps could easily be replicated, it made people misuse the whole system. To combat this issue, amusement parks have now come up with a technology to use the stamp, but stop it from being replicated. Yes, they use UV-activated invisible ink to create the stamps.

Most invisible ink pens today use UV black light with a wavelength of 380 nm, falling outside the visible spectrum. Moreover, the pens come with both features: writing and decoding. They come with a nib to write messages and are filled with UV-visible ink. And the rear end or cover of the pen features the built-in UV black light that can make the writing readable.

The ink contains properties that make it glow under the UV light and will remain invisible without it. Photoinitiators help in making UV ink; it is a substance that absorbs the UV light fulfilling the role of an UV-activated invisible ink pen. That said, there are three main types of UV ink, namely, translucent, opaque, and semi-opaque – each containing acrylic monomers and photoinitiators that respond to the UV light.

Some examples of everyday substances that can be used as ultraviolet-activated inks are:

How To Keep Your Invisible Ink Pen Message Hidden?

A message or text written using invisible ink may not be visible to the naked eye. But there are a few tell-tale signs (like pen scratches) that help us understand the paper had been used. And anyone with the basic understanding of invisible ink, might use different materials until they eventually figure out the words of your written message.

Or, you may have read the message and now you don’t know to make the text invisible again, risking it being exposed. To avoid this, you can do the following things. If your message was chemically-decoded, and the writing on the paper is now colored (and visible, of course), you can reverse the effect.

Just place the paper under strong sunlight or rub some acid/ bleach solution on it. This will make the message invisible again.

Similarly, to prevent the written message from being revealed without your knowledge, you can dampen your paper with a wet sponge or some steam before you use it. Once it is dry, write the message as you would normally and you’re good to go. 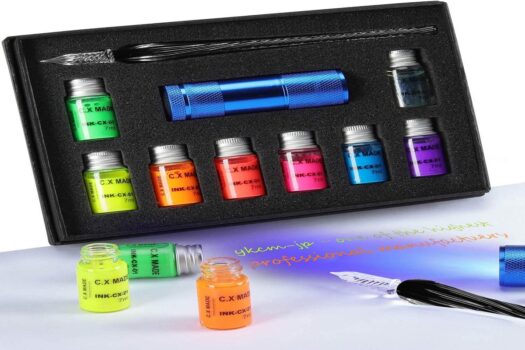 Invisible inks have more to them than a fun little prank. They have been used throughout history for various purposes and still manage to hold their importance intact. Now that you know all about invisible ink pens and the types of invisible inks, why don’t you go try them.

Even if you don’t want to get an invisible ink pen per se, we’re sure your kitchen will have at least one ingredient that will help you write your own secret message.

For a teacher, this would be a fun class activity that will keep the kids engaged. Or if you’re writing messages for fun to send it to your best friends, share the joy with us!

If you enjoyed reading this article, give our article titled “how to change fountain pen ink” a quick read. With that, we’ll wrap up this guide for today!

November 19, 2022 0
Ballpoint and gel pens have their own unique features. But the most basic difference between the two is the type of ink they use....