Home DIY Projects & Ideas How does a thermal camera work? | All You Need To Know

Thermal cameras have specially designed lenses that are extremely sensitive to infrared radiation and infrared energy. The radiation captured by the camera’s sensor is sent to the image processor, which converts the data to form thermal images.

A thermal imaging camera is widely used by astronauts and physicists to provide various insights about space and the universe.

However, thermal cameras can be used to add an extra layer of security for your residential and business establishment as well. They can also be used in factories during production to monitor internal temperatures and prevent accidents.

On that note, we have compiled this guide to help you understand everything about thermal cameras.

How Does A Thermal Camera Work? 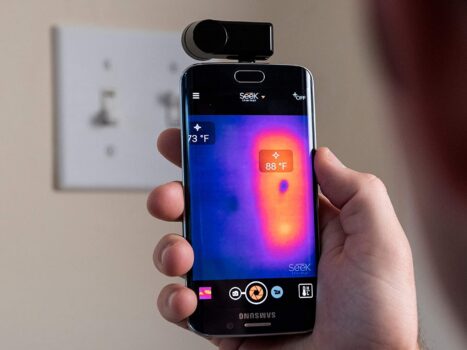 If you are wondering how accurate thermal imaging cameras are, you will first need to understand how the device works. A thermal image camera is designed with a heat sensor that helps record various heat signatures emitted by different objects. In addition, the sensor has a special lens attached to it which helps in capturing different temperature reading accurately.

Using the devices, scientists and engineers can identify areas of excessive temperature. The camera can also tell if a certain object or region is wasting heat energy which is hard to detect with the naked eye. Although we use light to see most objects, it is a small part of the electromagnetic spectrum.

As such, wherever you point a thermal imaging camera to an object or area, the sensor detects an invisible infrared spectrum that lies between visible light and microwaves. Thus, an IR spectrum can capture a wide range of heat signatures from different objects, which helps scientists form a deeper understanding of the object.

For instance, whenever you look closely at a color thermographic display, you will notice warmer regions are represented by colors such as yellow, red, and orange. Similarly, cooler places are represented by blue and purple color signatures. Rooms with normal temperatures usually emit a green color.

Since thermal cameras are designed to measure infrared radiation instead of visible light, it is capable of identifying heat sources in extremely dark environments.

Although thermal cameras seem quite popular, it was only in the last few years that manufacturers started mass-producing them for various types of civil applications. In fact, thermal cameras have even become popular amongst hobbyists since they can do all sorts of things with them.

Here is a list of some inventions that were made after the discovery of infrared radiation:

In this section, we shall discuss the different components of thermal imaging cameras and how each has a specific role to play.

Unlike conventional cameras that use ordinary lenses, thermal cameras use specially designed lenses. These lenses are designed to work like human eyes, but instead of visible light, they can detect infrared radiation. The lens can also be used for measuring the different frequency of infrared waves, which is later on processed by the sensor.

Moreover, infrared cameras don’t use glass as an important material for the lenses. Glass can easily block long-wave infrared energy and radiation, which is important for collecting information. As such, most brands design infrared cameras with lenses made of calcium fluoride, zinc selenide, germanium, and sapphire.

In fact, these materials can cater to an electromagnetic spectral range of radiation ranging from 7 to 14 μm. However, you must ensure that the lenses have an anti-reflection coating to prevent deflection from occurring.

Another important component of the thermal camera is the sensor since it performs most of the primary functions. Once the infrared radiation is captured by the camera lenses, it passes through a thermal detector. The detector’s main role is to identify the sudden increase in thermal and infrared energy.

This is a type of thermal imaging camera sensor that uses a cooled sensor detector such as lithium tantalate. This material is capable of generating minute electric voltage whenever there is a fluctuation in temperature.  In simple terms, the detector can detect infrared photons in the environment.

In comparison to microbolometer detectors which use photoconductivity, a pyroelectric material uses photovoltaic, which offers a wide range of advantages for detecting long-distance radiation. However, cooled thermal cameras are losing their popularity since they are expensive and bulky.

Moreover, the imaging sensor has to be integrated with a cryocooler which can make the camera less portable.

Microbolometer is a device that is sensitive to radiation, and it was first invented by Samuel Pierpont Langley. As soon as radiation is detected by the microbolometer’s absorption element, it causes a sudden increase in temperature. The more energy it absorbs, the higher the temperature tends to increase.

The change in temperature can be measured through a resistive thermometer which notes the electronic signals and converts them to electronic images. In short, the microbolometer is made from thin layers of metal which are connected to a thermal reservoir.

Apart from that, it has a sensor array that houses thousands of detector pixels arranged in a grid format. Each of these pixels reacts to the radiation whenever the device comes in direct contact. As soon as the pixels react to the radiation, they produce resistance which is converted to an electrical signal. To process the signal, a mathematical formula is used as the foundation of the color map.

The image processor plays an important role in converting the data collected from infrared radiation to an output that can be easily interpreted. As such, the image processor is like a human brain since it can perform various functions and calculations.

While processing data, it performs several processes, such as classification, pre-processing, and feature extraction. Additionally, a filter is used to eliminate and remove unwanted data and noise from the extracted data. The processor also uses several mathematical equations and algorithms to come up with images that are viewable and easy to access.

Finally, the converted data and information from the processor are transformed into electrical signals, which can be viewed on display. As we have mentioned earlier, the data is collected from each pixel which is converted later on by using a mathematical algorithm to project a color map.

Color maps are used to represent different heat signatures captured by the object or surface. In the past, people used non-colored or black-and-white representations since they were the most popular thermal imaging displays at that time. However, these representations were less accurate and hard to interpret.

Thermal smart sensors are extremely sensitive to visible light energy and infrared radiation. As such, you should always invest in a dedicated stand to mount the camera in a fixed location. This helps to keep the camera in a stable position so that it can capture a clear and precise thermal map of the objects.

By maintaining a stable position, the thermal cameras are also able to determine if the object emits extreme heat or not. This can help to uncover important mysteries of unknown objects or creatures.

Nowadays, regular cameras and phone cameras do have built-in thermal technology, but they lack the proper image stabilizer to capture a clear thermal image. Thus, a stand plays an important role in creating a stable environment for sharp and precise thermal image capturing.

By connecting the thermal cameras to the dual monitor setup, you can perform analysis and compare different thermal images side-by-side. 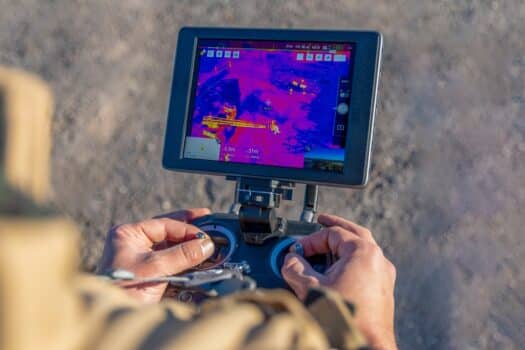 In addition, all heavenly bodies in space emit infrared waves and signatures, which can be easily detected using a thermal camera. One prime example of this application is Saturn’s aurora which can be easily monitored using the NASA thermal camera. The data collected is used to compare and contrast the difference between Earth’s and Saturn’s aurora.

Besides, if you use longer infrared wavelengths, you can collect information from dusty regions in space and the nebulae. As such, scientists can use this for scientific research to uncover the universe’s origins and how it was born.

When it comes to auto repairs, most mechanics struggle to locate the problem since it is not visible to the human eye. In fact, you might have to do a lot of guesswork to determine if the fuse box is giving trouble or the electrical system is. But this problem can be solved if you use an infrared camera to pinpoint and locate the problem.

For instance, overheating is a telltale sign that the vehicle is having trouble and it needs an immediate fix. It can also be used for detecting gas leakages within the vehicle since you can easily detect the thermal signatures of the gas. This makes it extremely handy in repairing damages and preventing serious accidents from occurring.

As such, using a thermal camera can save a lot of time and help to speed up the repair process.

Over the years, doctors have used infrared cameras to detect and treat several viruses and illnesses which are not detectable to the human eye. In fact, infrared cameras are best suited for treating both cold-blooded and warm-blooded  animals since they were originally developed to capture infrared radiation emitted by various objects and organisms.

Moreover, pets cannot verbalize their pain which makes it tough to determine if they are sick or not. But, you can identify the illness by tracking the infrared radiation emitted from the body. For instance, if you notice high temperatures across the head, then your pet is suffering from severe fever or flu.

Apart from that, the thermal camera can be used for locating problems in the pet’s heart so that early steps can be taken to treat them. As such, thermal cameras have a broad range of benefits when it comes to treating animals and saving their lives.

Once you can detect the problem, diagnosing the pet becomes easy, and they can recover faster than usual. So, the next time you notice your pet showing signs of illness, take them to a vet and ask them to do a thermal imaging scan to detect the problem. 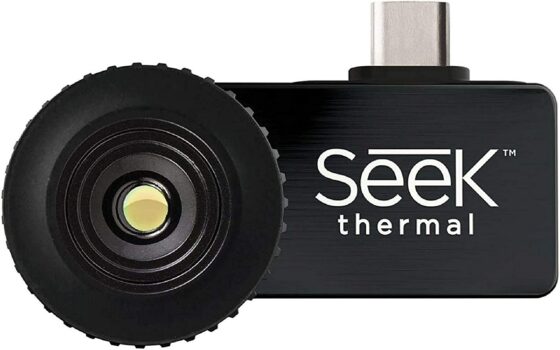 How does a thermal camera work Conclusion

With that, we have reached the end of our informative guide, and we hope you were able to learn more about thermal cameras. Before signing off, here are a few tips that can help you to maintain the thermal camera more efficiently.

Firstly, you should always clean the lenses with a microfiber cloth since dust and debris can interfere with the heat sensor. This can cause the camera to record the temperature inaccurately.

Also, never wipe the lens with a wet cloth since water can easily damage the camera sensor. A dry cloth is preferable since it doesn’t cause any damage to the electronic components of the camera. Alternatively, you can hire a professional to service the camera, but you will have to pay a small fee for the services they charge.

That said, it’s a wrap. See you next time!

What Are The Advantages And Disadvantages Of Heat Transfer Printing

July 14, 2022 0
Are you looking to make your own t-shirt designs instead of buying readymade ones from online and offline stores? Then you can give heat...