Home DIY Projects & Ideas Differences Between A Kitchen And A Kitchenette

We have been raised on the idea that every house needs to have a dedicated kitchen space.

Little did we know that modern times would bring forward the trend of living in tiny houses or even out of your car. Hence, it’s time to evaluate the idea of what really entails a kitchen and if it’s obligatory to have one.

While thinking about the alternative for a kitchen, the simplest choice is often that of a kitchenette. However, most people are pretty confused about the difference that lies between the two utility spaces for cooking. And, we can’t complain, as the names given to them are so similar.

Therefore, we thought of coming up with this informative guide to make you aware of the basic differences between a kitchen and a kitchenette. We have gathered the information based on the various needs of people when it comes to cooking space.

So, without further ado, let’s begin!

What Is A Kitchen? 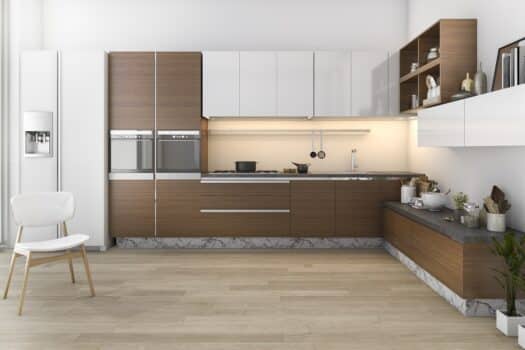 A kitchen is a separate room fully equipped with appliances like a stove, a microwave oven, a refrigerator, and possibly a dishwasher. This area also has a countertop space to prepare the ingredients that are going to be cooked. A standard kitchen is also likely to have cabinets for providing storage space to keep everything from spices to pots and pans.

Moreover, a kitchen also has plumbing components such as a sink, along with access to hot and cold water. Do remember that there’s no exact formula for creating a kitchen. It differs based on the size of an apartment and the available space.

On this note, we would like to mention that modern homes come with more extra appliances than ever before. Other appliances like coffee machines, stand mixers, and food processors are present in the space apart from the essentials. Hence, kitchens tend to take up a lot more area, even in single-level apartments.

What Is A Kitchenette?

A kitchenette is often defined as a partial or a mini kitchen. It has limited appliances that can fit in less space and is usually restricted to a microwave and a small dorm-size fridge. Some also come with a hot plate and an electric kettle. Compared to apartments, kitchenettes are more accepted in college dorms, hotel rooms, or smaller apartments.

Furthermore, kitchenettes may feature smaller appliances and a tiny sink, perfect for one person or a couple. So, a kitchenette is also great for people who don’t need to cook a lot. But, that doesn’t mean you have to restrict yourself in any way. There are plenty of resources on the internet to find out ways to get the most out of a smaller kitchenette.

And, if you’re a designer, do check out our article on online kitchen design software options to create beautiful spaces.

Key Differences Between A Kitchen And A Kitchenette

The most basic difference that lies between a kitchen and a kitchenette is the size. However, we must note that there isn’t a specific size attached to either of them. An average kitchen is said to have an area within 150-225 square feet. But, this may seem a little too big for those who have a house or apartment with roughly an area of 1000 square feet.

Usually, any cooking area with a space of about 70 square feet is taken to be a small kitchen. So, anything below that range can be regarded as a kitchenette. Having said that, if the overall living space of a house is much bigger, then even the average-sized kitchen may fall short. In that case, kitchens may have an area of up to 720 square feet or more.

Hence, the key decision of choosing between a full-sized kitchen and a kitchenette lies in the total area available to you. The space that’s supposed to be the kitchen has gone through several changes over centuries.

There was a time when rural homesteads used to have a much larger space for cooking. Whereas in urban homes, the kitchens before the 1900s were much smaller, and some even had a small separate room for it.

On the other hand, tiny homes of today, have kitchenettes as small as 30-50 square feet. Also, these often act as multipurpose spaces, such as a dining or a study area.

If you have ever been to a hotel with kitchenettes in their rooms, you will know that the utilities are way different from the usual kitchen. The space allotted to the kitchen has significantly increased because of the various appliances that we use.

A full-size or well-accommodated kitchen will contain standard cooking appliances like a stove, a microwave, a large refrigerator, among other things. On top of that, most kitchens these days come with a dishwasher that might be regarded as a non-essential appliance while building a kitchenette.

Moreover, some homes have their washing machines and dryers in the kitchen area rather than having a dedicated laundry room. Hence, homeowners should decide on the appliances that are a must for them in their day-to-day life.

On the other hand, kitchenettes often have the very basic and essential devices that you would require. Instead of having a full-size stove and oven combo, most kitchenettes will have a hot plate. Other kitchenette appliances may include a microwave oven, a toaster oven, and a small fridge. In hotel rooms, they include a mini-fridge because of the smaller space.

When it comes to the sink and counter space, they tend to be limited in the case of kitchenettes. However, a full-size kitchen may even have an extra island dedicated to eating.

Another feature that’s very different between the two is the storage area. Bigger kitchens in apartments are meant to be fully equipped, which requires a lot of cabinet space. Often, in small kitchens or kitchenettes, there isn’t enough space to put the cabinets, resulting in less storage space.

Under such circumstances, designers need to get more creative to hunt down the space. You can check out our article on kitchen layout 101 to know more about the design aspects.

The main difference between a kitchen and a kitchen lies in the suitability of space along with its owner. For example, someone who owns a studio apartment and has hectic work days may not require a full kitchen. In fact, a kitchenette with smaller appliances would certainly work for them because of the low maintenance.

On the contrary, a family of six would possibly feel lost if they had a small refrigerator or a day without a dishwasher. A larger cooking area would also suit such a household because there’s always so much to cook. The kitchen would be even better with all the cooking facilities and a stove with multiple burners.

However, there are always ways to make a full kitchen more space-saving if a family has a smaller area. One of the things you can do is to get just the basics. This means limited appliances to make room for storage space.

Another way is to include the kitchen or kitchenette in the living space rather than giving it a designated area. And, it can be fun to enjoy dinner parties with live cooking sessions. 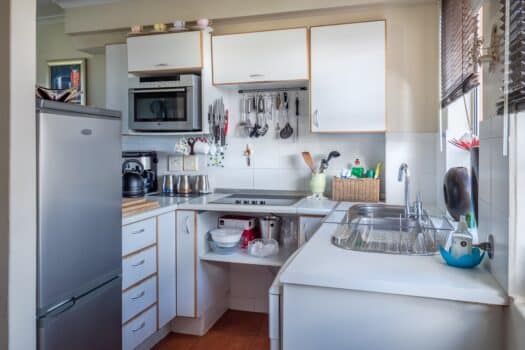 That’s everything we had to tell you about the difference between a kitchen and a kitchenette. We know that it can get a bit confusing, as there are so many design options available. You can check out our article on 12 interesting kitchen trends to look at some of them.

Having said that, we recommend you find out what will work best for your apartment, especially if it has a smaller area. Don’t worry about getting all the bells and whistles present in a full kitchen. It’s okay to want fewer appliances or a minimalistic kitchen area.

If still unsure, think about consulting a professional who has experience dealing with interior design for a small apartment. Do let us know if you have any further queries regarding the difference between a kitchen and a kitchenette.

Till then, goodbye and take care!

Kitchen Trends To Look Out For

10 Best Kitchenware Brands for the Connoisseur

20 Kitchen Design Trends You Should Consider

How to Repaint a Fireclay Farmhouse Kitchen Sink

What is the Average Kitchen Remodel Cost Breakdown?

9 Timeless Kitchen Trends That Simply Do Not Age

What Color Goes With Chocolate Brown + Things to Know

February 28, 2022 0
Putting together a color palette for decorating can be quite a challenge, especially when working with a chocolate brown color as a base.  Incorporating a...