Even the most spectacular example of architectural genius can disappear when the sun goes down. Soft curving elements, dramatic angular features and undulating lines all fade into non-existence as day turns to night. But with creative lighting, a building can be transformed.

Yet 30 years on, Hong Kong has evolved. Colourful, bright and dynamic, the city is thriving and with its restrained take on lighting and distinctly non-distinctive façade lighting, the HSBC skyscraper was being outshone as the sun set.

In 2003, the building’s nocturnal reinvention began. The skyscraper became part of Laservision’s lighting project ‘A Symphony of Lights’, a 14-minute nightly light show.

And 12 years later, in 2015, illumination Physics was commissioned to completely update the building’s façade lighting, as well as reinvigorate the lighting in ‘The Cathedral’ – the building’s grand, abbey-like atrium.

Previously subtle and understated, the atrium is now filled with bold, saturated colored lighting. Clean lines emphasize the atrium’s industrial structure, and LED and lighting control means the hue and saturation of the lighting can be easily changed. 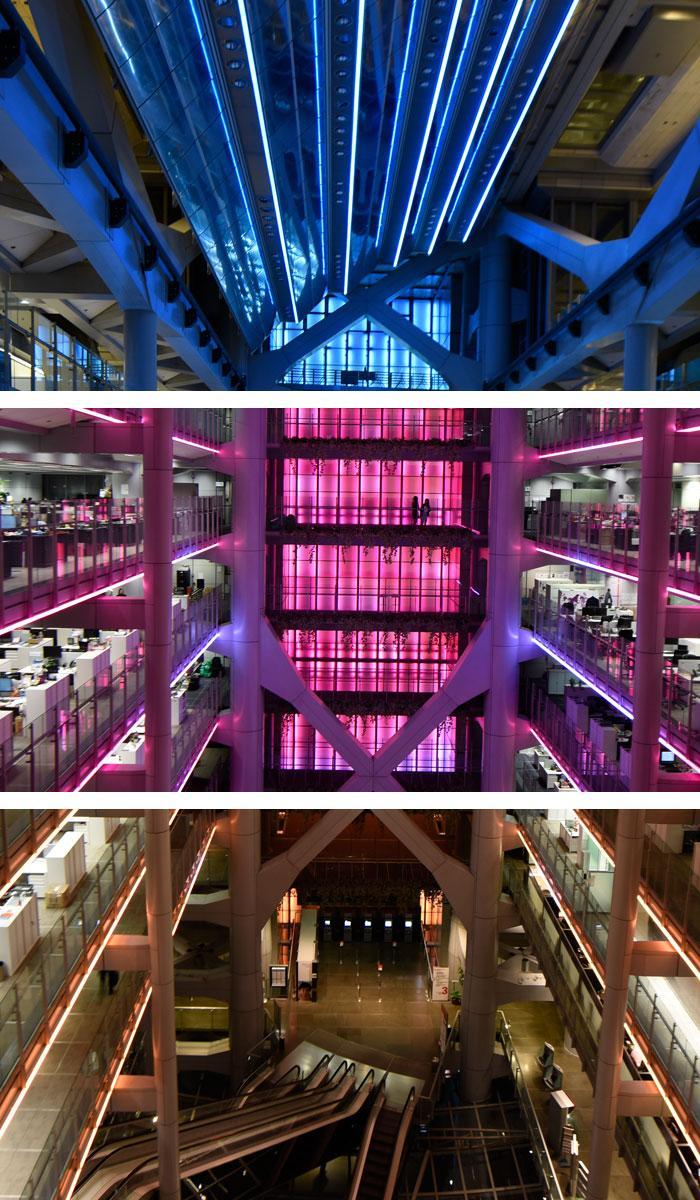 A new highly sophisticated media screen has been installed on the building’s façade. Small LED strips, which are all but invisible in the daylight from the outside, combine to allow a wealth of complex kaleidoscopic messages to be displayed through light.

In another city famous for its bright lights, the illumination of the spire of the Chrysler Building at night is an instantly recognizable and distinctive feature of the infamous New York skyline, both before and after dark. Although part of Van Alen’s original plan for the building, this nocturnal lighting was not installed until 1981. 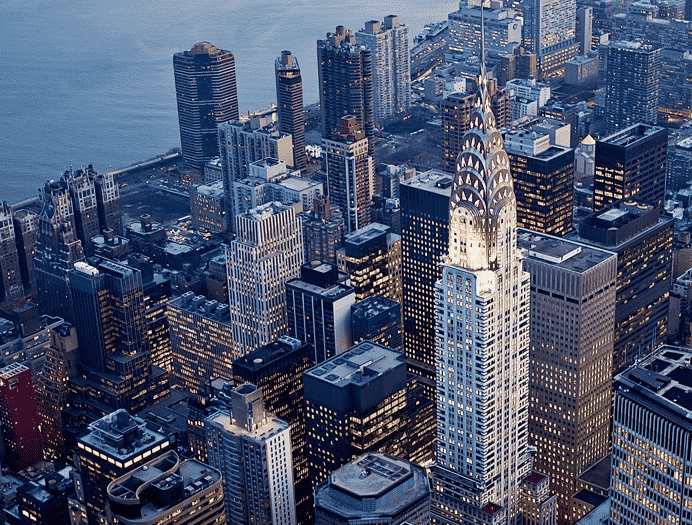 As well as the unmistakable V-shaped lighting inserts, floodlights also allow the spire to be lit in different colors for particular events or occasions.

By contrast with Hong Kong and New York, Zurich’s approach to night lighting is much more modest. Rather than over-saturating the night with ever-brighter and more contrasting displays, the city’s urban designers are instead enforcing a more harmonized ‘dialogue’ between its structures and buildings.

After sundown at Lake Zurich, a balanced, calm and respectful skyline takes shape. A far cry from the typical glare of urban centres at night, a lighting palette of soothing white light seems to softly caress the city’s architecture after dark. 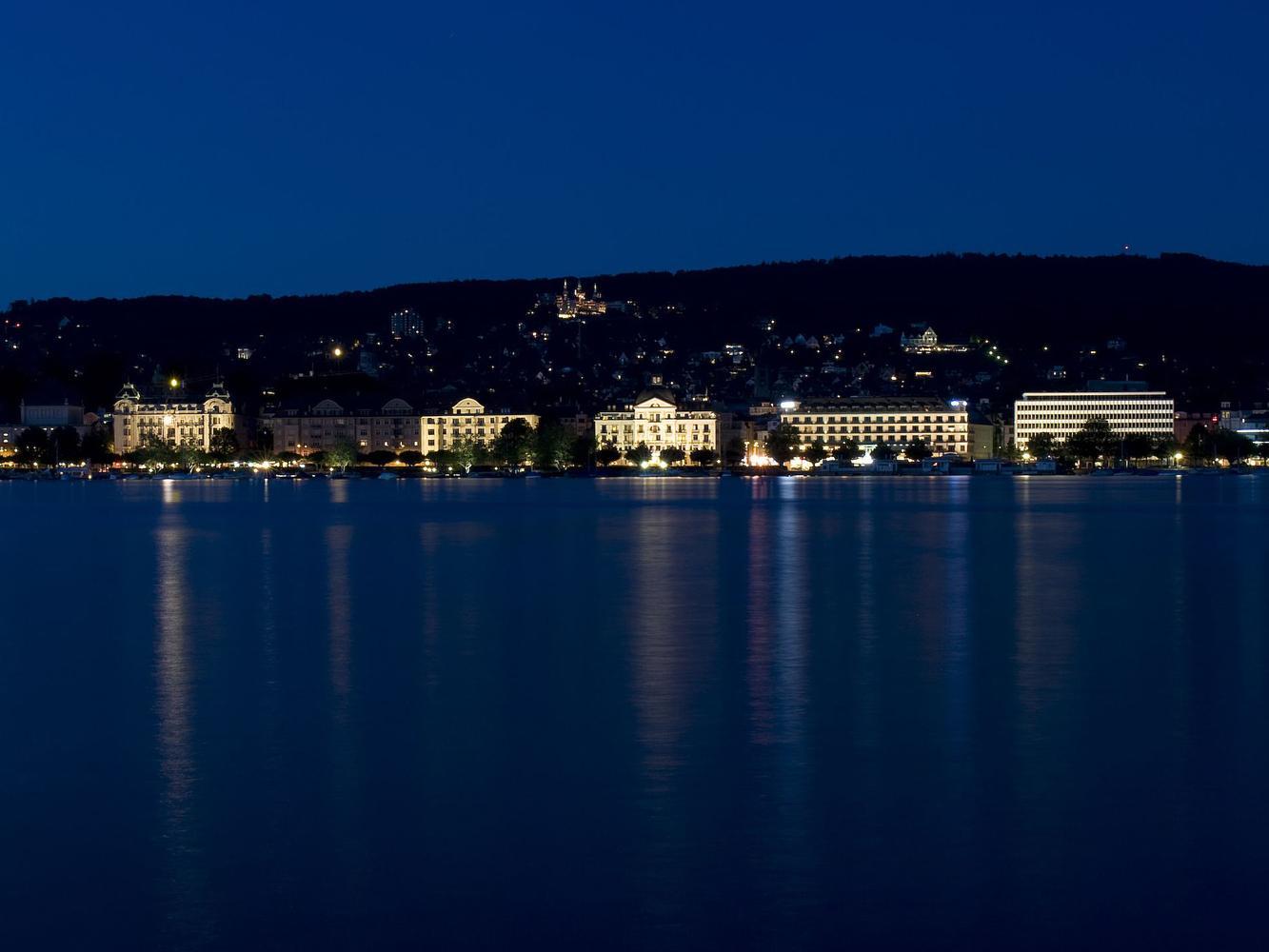 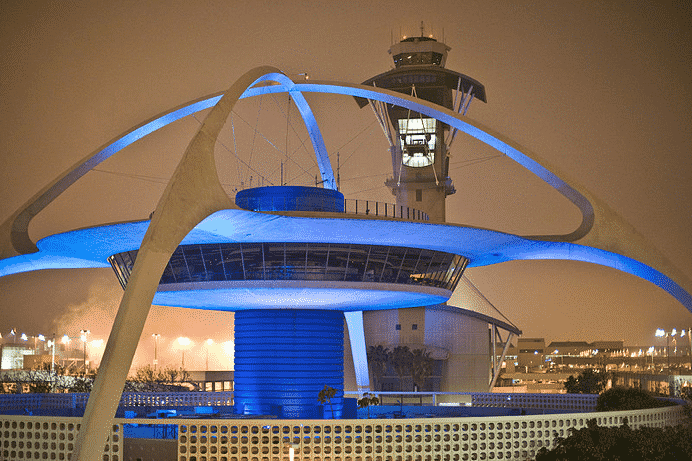 With its futuristic design, the Theme Building needed lighting design to match. In 2010, the building was renovated by Walt Disney Imagineering, which, among other things, included a new exterior lighting system that illuminates the arches of the building from below.

Dramatically highlighting the structure, the new lighting system helps the iconic building stand out against its backdrop after dark. And with colour changers, gradually the hue changes producing an array of colour effects.

Another example of bold, modern lighting reflecting a building’s design and purpose is the Water Cube in Beijing. The bubble structure, while instantly portraying the purpose of the building, lends itself both to maximising daylight and to dynamic LED lighting at night. 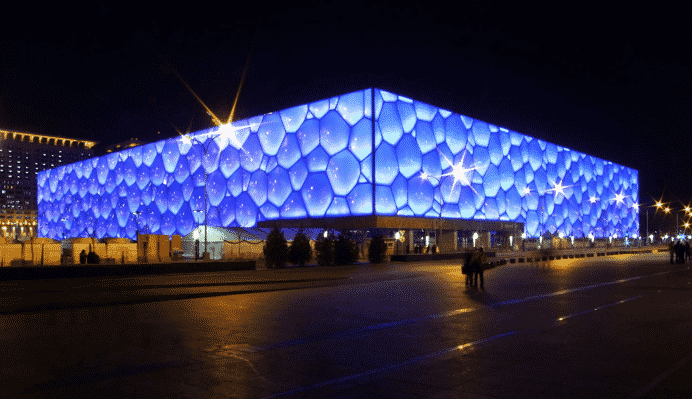 After dark, colour-changing LED lighting illuminates the bubbles from the inside, giving the whole structure an extraordinary glow.

The Ancient Theatre of Taormina

Built in the third century BC, this ancient Greek theatre in Taormina, southern Italy, is now regularly frequented by visitors and hosts a variety of operatic and theatrical performances, as well as concerts. 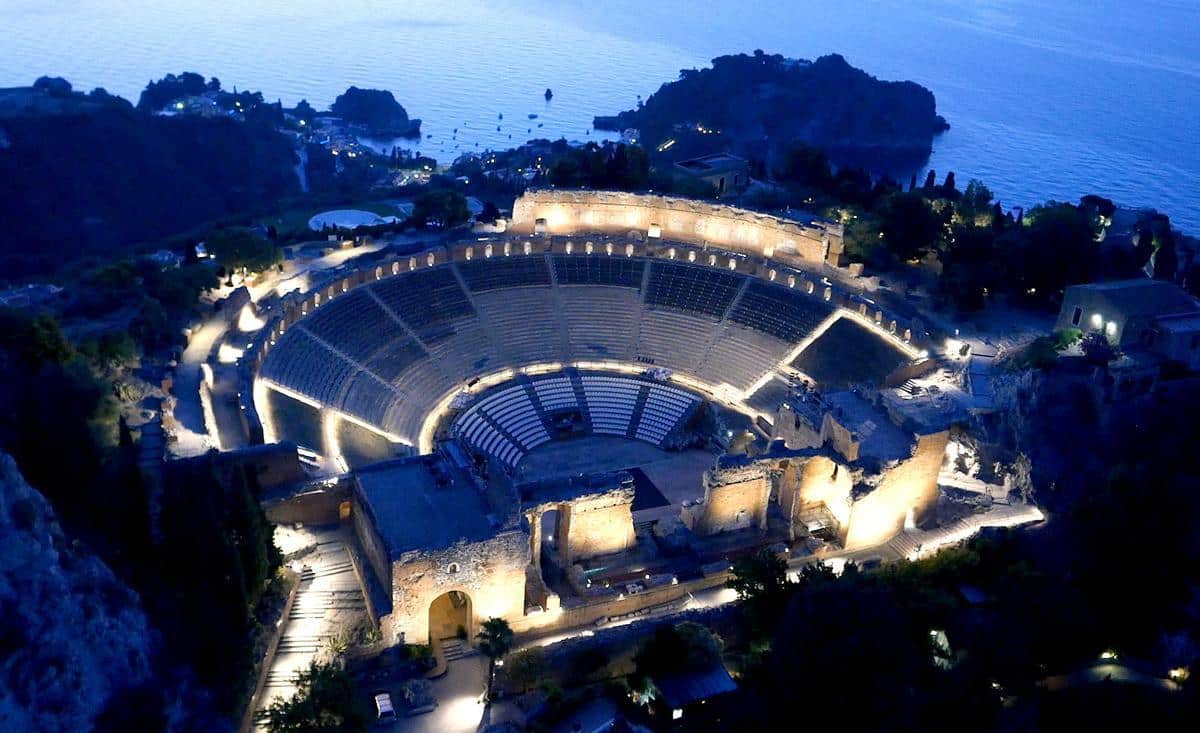 And through a recent transformation in the site’s lighting system by iGuzzini, its splendid classical architecture and heritage have been brought to life. 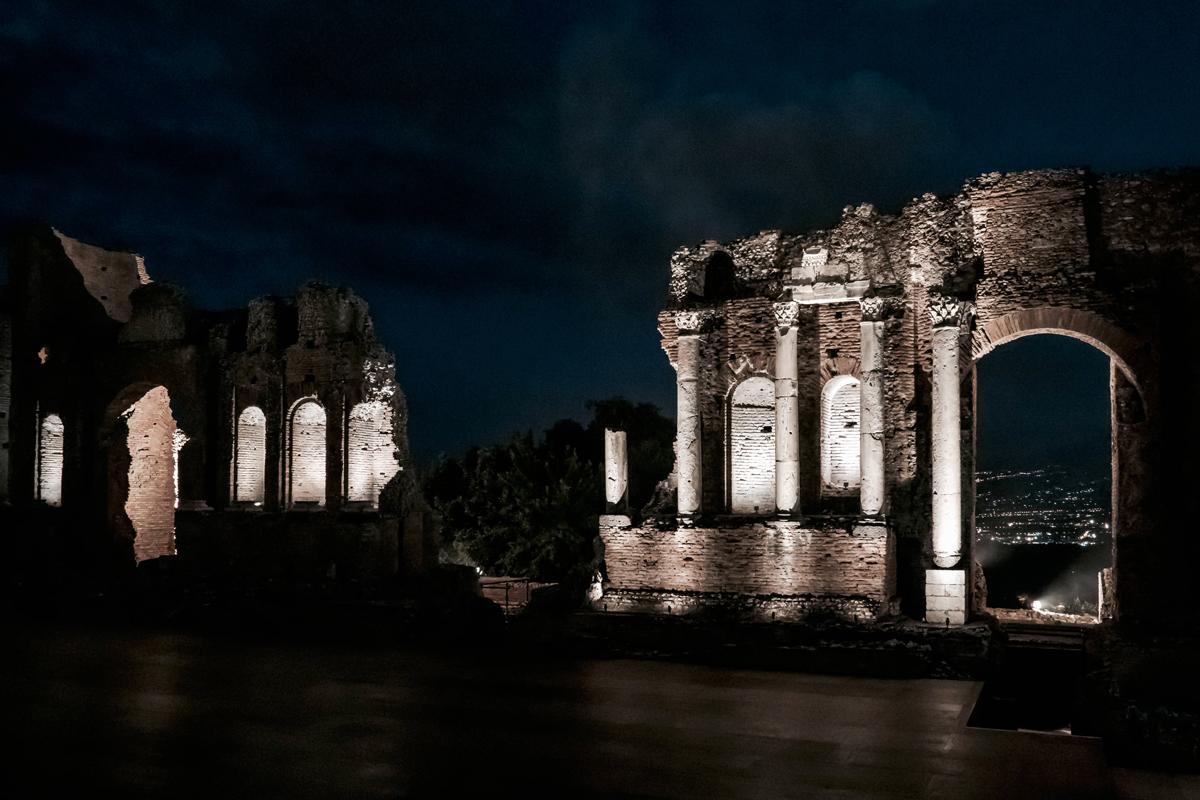 Subtle, compact and non-invasive lighting solutions illuminate and highlight the dramatic features of the sight, while retaining the theater’s character and leaving the magnificent structure undisturbed as far as possible. And by using warm color temperatures, the delicate hues of dusk are recreated and the natural minerals of the site are emphasized and enriched.

Contrasting with the ancient structure and heritage of the theatre, the new Waste to Energy Plant in Roskilde, Denmark, designed by Erick van Egeraat, juts unapologetically into the city’s skyline. Instead of hiding the industrial and functional nature of this building, it is celebrated. 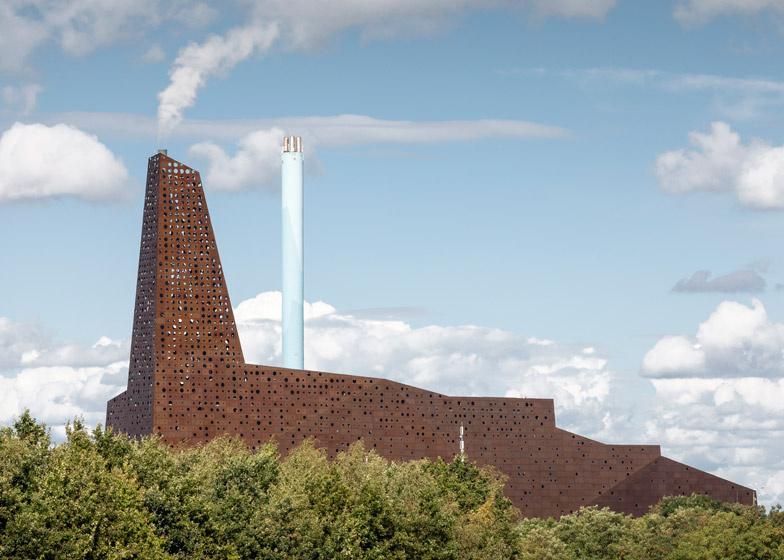 The plant’s façade combines two layers – the first providing the required climatic barrier, allowing more freedom in the design of the second. Punctured by irregular holes, the weathered aluminium plates of this layer produce a rusted finish, evoking the feel of industrial sculpture rather than waste management. 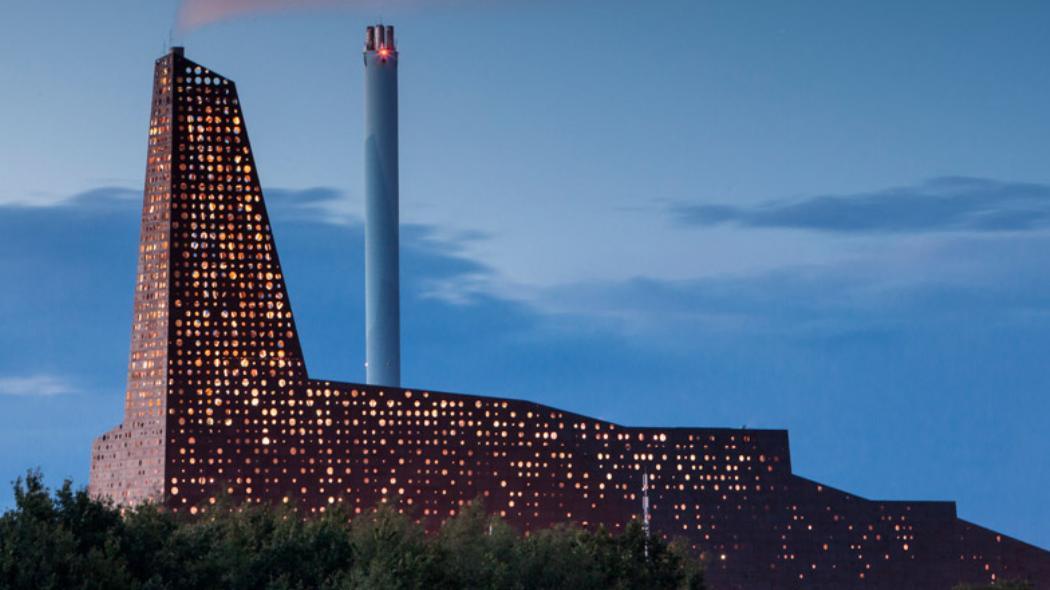 By night, however, the structure is transformed. From industrial sculpture to an imposing, yet somehow poetic, light installation, the building takes on a whole new dimension as dusk descends. By reflecting light off the inner surface, the building glows through its perforated skin, underlining its industrial character while adding value to an otherwise purely functional construction.

As one of the main transport hubs in Portugal, the Gare do Oriente in Lisbon is another industrial structure with a twist. Designed by the famous Spanish architect Santiago Calatrava in 1995, it combines modernist design with Gothic influences.

At night the glass and metal structure overhead is illuminated, with the angular lines contrasting with the soft glow created.

From imposing and iconic industrial landmarks to a compact bamboo home. Blooming Bamboo Home in Hà Nội, Vietnam, was designed by H&P Architects in answer to the wide-ranging and severe natural phenomena experienced by Vietnam – storms, floods, landslides, drought – and the considerable damage caused by these events every year. 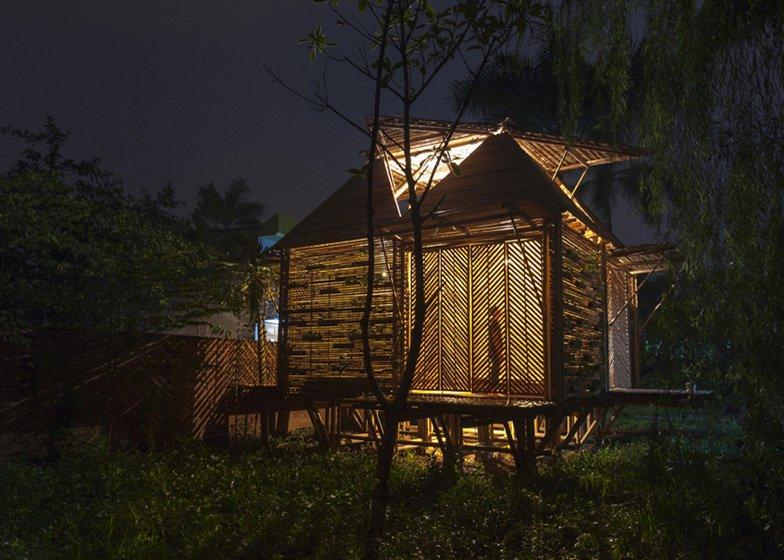 The compact bamboo module involves simple assembly (the user can build it in just 25 days) and is strong enough to survive, for example, a 1.5m-high flood. It is beautiful. By day the intricate detailing and rich natural textures are both tactile and a delight for the eyes. But by night it transforms into a delicate lantern, hovering above the ground, light diffusing and seeping through its permeable screen façades.

As well as highlighting the architectural features of a building at night, lighting can also be symbolic. 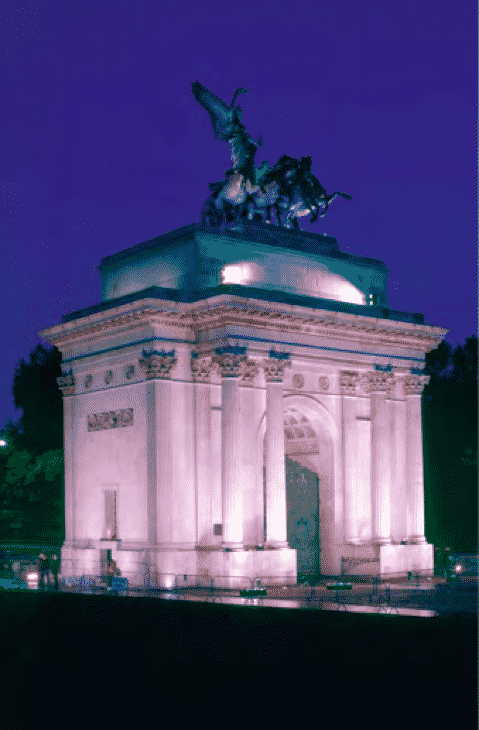 Wellington Arch in London, for example, has been used in the past as the platform for dynamic lighting. In 2001, pink floodlighting illuminated the structure for Breast Cancer Awareness Month and subsequently, for the 80th anniversary of the Royal British Legion, it was illuminated with images of falling poppies in an installation designed by Ross Ashton.

What do you think about these examples and how do you see lighting in architecture ? How is light used in your city ? We would love to hear from you in the comment section below !

October 17, 2014
0
Amidst some working-class houses JDWA designed twelve apartments and eight homes for people with a mental disability, in a scaled up house near the canal